I have recently become enamored of knitting.  I’m not an advanced knitter, but I’m doing better than I did some years ago.  I found a yarn shop a block away from where I work, so I think I will get adventurous and take a class.  They have classes in knitting socks and an unusual design of neck scarves.

Actually, I learned to knit years ago, when I was about 11 or 12 years old, during a very stormy spring in Indiana.  I had a favorite aunt & uncle who were living with us at the time, they had moved into my grandparents’ house while they were building a house.  It was a year of fun for all 6 of us grandchildren living there at the time, plus my aunt was pregnant and we anxiously awaited the arrival of our new cousin.  Imagine 4 giggly little girls and 2 sweet little boys playing on the farm.  I was wanting to learn how to knit and so my aunt sat me down one afternoon to show me how to knit slippers.  A few weeks later, during a really bad storm, we jumped up to go outside to see the clouds forming and somehow, I dropped that slipper and never did find it.  My knitting efforts were sporadic after that for years.

The yarn recommended was Miss Babs Northumbria DK, Candied Pecan, but when I checked the website for the yarn, it was sold out.   The pattern was called Morel (as in the color of morel mushrooms) and I think I ended up buying yarn called Mushroom at Joanne Fabrics.  It turned out a lovey shade of, well, mushroom and was very similar to the Candied Pecan color.  While knitting it, I actually found the hat I was missing – it was in my car, so I decided to finish this one and sent it to my daughter for Christmas.  It turned out so beautiful, I may knit another one.

Not to be outdone, I’ve started another little knitting project, using up yarn I have in my stash, nothing expensive here.  I’ve seen knitting emails come through with patterns for wash cloths.  Here is one that I’ve started …. 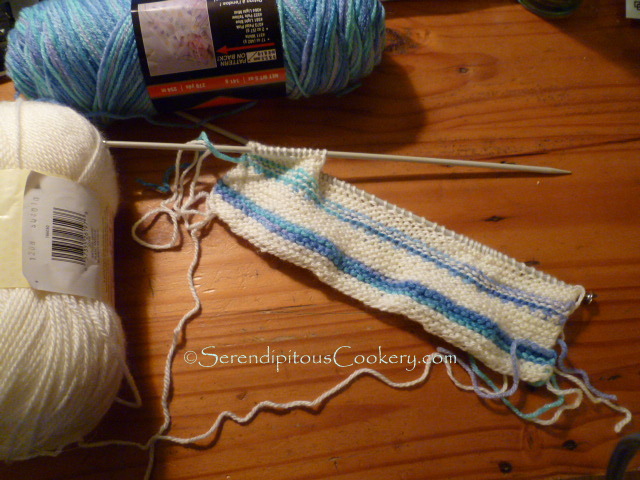 I love having the random stripes of color on a white background.  Here is the link to this pattern ….  http://www.allfreeknitting.com/Dish/Tried-and-True-Dishcloth-Knitting-Pattern   It’s really easy, you just knit each stitch until you’re finished.  A little instruction is needed in order to add in the colored yarns, but it’s not difficult.  Someone asked me why I was working on dinky old wash cloths, my reply was that I could experiment in a small space and still use the thing.

In the midst of all this, I also started knitting a scarf for myself to match the hat that I thought I had lost.  It’s a variation of a cable stitch and I’m trying to use up old yarn I’ve had in my stash for several years.  I have several skeins of this yarn and some matching green, so I’ll just keep knitting until I run out, I suppose. 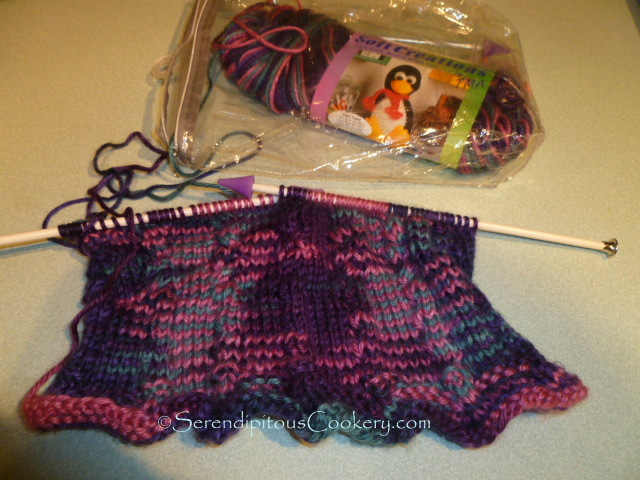 Also, about the first of December last year, I was at a discount store and came across an unusual yarn in the knitting aisle.  It’s called Starbella Luxe Yarn (follow this link to learn more about this product ….   http://www.premieryarns.com/searchpage.aspx?k=starbella&utm_source=google&utm_medium=cpc&keyword=g+generic+b&ne_ppc_id=1821&ne_key_id=105118039&ne_sadid=12732157239#1&profile=Premier    I can’t really say it’s a yarn, but rather a mesh or net like fiber that, when the instructions are followed, creates a lovely scarf.  It was very easy and fast to knit and I had it done in time to give it to my children’s grandmother for Christmas. She was delighted with it! 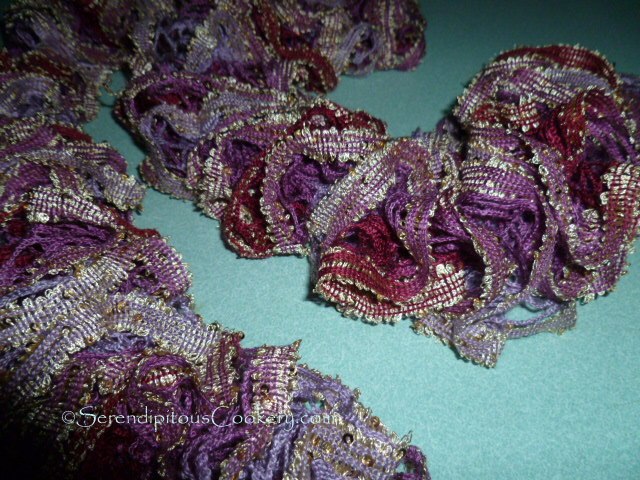 This entry was posted in Knitting and tagged Knitting, Knitting Hats, Knitting Scarves. Bookmark the permalink.

A blog about a Scottish woman, who lived in Denmark, and moved to New Zealand

An Adventure Abroad in Copenhagen

The best longform stories on the web

italy on my mind

"in food there are memories"